There is an old saying in Italy stating “Non far nevicare!” [Don’t make it snow!] used when someone does something out of the ordinary; the saying ironically emphasizes the rarity of the occasion.

Well, today my husband and I went out to eat!!!!!!! see how many exclamation points? it’s because we have gotten a little lazy even about going out to eat.
We have been having some pretty nice weather this winter around here. But on our way to the restaurant, I noticed how dark was the sky, just like in the movie Twister.

Almost black, I am not exaggerating. 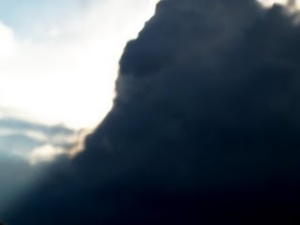 I turned around in the car and took this picture.

I said “wow, we are really making it snow by going out…” referring to the saying I wrote before.

As we drove to the restaurant, the storm was chasing us, and suddenly large icy snow flakes, [or small hail balls] began to fall.
It only lasted a couple of minutes. By the time we arrived to our destination, the dark clouds were magically gone, and the sun appeared again.

It’s really true! I love it when these saying actually apply to life events….

And, sorry to those who had to deal with this weather: we’ll try to go out more often.

Today I am grateful for a great meal and good times spent with Joe.

One thought on “Don’t Make It Snow”

Retracing my steps to collect random memories: they are the milepebbles of my life.